I have looked at some of my previous work and noticed that the frequency jobs only did one SCF cycle before moving onto the vibrational analysis portion. I even decided to read in the SCF of the optimization job via
SCF_GUESS READ
in my input file but I continue to see several SCF cycles being performed. 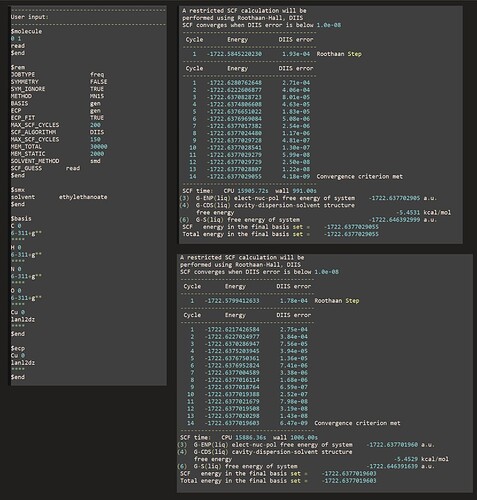 JOBTYPE = FREQ does not assume that your SCF is converged, even with SCF_GUESS = READ (the latter of which affects the guess but not any convergence criteria). Generally two SCF cycles is the minimum number (to make sure that Fock and density matrices are consistent, even if DIIS error is below threshold on the first cycle). It’s a bit unusual for it to take 14 cycles and I suspect it may have to do with the solvent model, i.e., surface charges being zeroed out when the guess is read back in. In any case, your SCF converges in a number of cycles that’s not unusual for a single-point calculation with SCF_CONVERGENCE = 8 (the default for frequencies), so this is normal.

It has to do with the solvent model you use. When you have SMD model hessian cannot be solved analytically and numerical calculation is required at each step of which you have SCF calculation. I had it even running up to 7 days, depending on the number of electrons and theoretical model chemistry.

Yes, there should be a very large warning to that effect printed near the beginning of the output file.