How to simulate X-ray absorption spectroscopy (XAS) with TDDFT

Because of its balance in computational accuracy and cost, TDDFT has become the most popular theoretical method for excited state calculations. It is almost a blackbox theory for non-experts, which requires only minimum inputs such as the no. of excited states and the choice of exchange-correlation functional. Hence TDDFT can be successfully used even by experimentalists. Q-Chem offers both simple settings for routine TDDFT calculations and flexible options to meet the special needs of advanced TDDFT users.

Here we present an example of TDDFT simulation of the C1s X-ray absorption spectrum of trans-1,3-butadiene using the short-range corrected exchange-correlation functional SRC1-R1. The geometry has been optimized at the MP2/cc-pVTZ level of theory.

Example. TDDFT simulation of the C1s X-ray absorption spectrum of trans-1,3-butadiene.
Q-Chem input and comments (after “!”):

The simulated XAS signal is shown in the following figure: 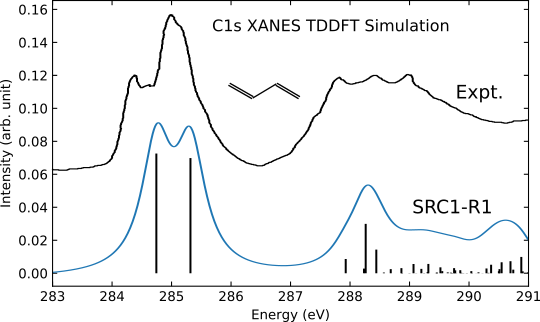